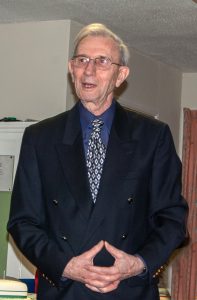 It fills me with great sadness to have to tell you that our friend and President, Phil Peddy ARPS APAGB, was taken into the Royal Surrey hospital two weeks ago after a fall, and died peacefully there on 27 December 2020. Jose and their son were able to visit him for the last few days when he was moved to a private room. He would have been 95 in January.

Phil lived for many years in Molesey, where he was a teacher and a member of Molesley Photographic Club. When Phil retired from teaching he and Jose moved to Headley Down, and as there was no camera club nearby, Phil set about organising one with a small group of friends. Thus was born Ludshott Photographic Club, with Phil as Chairman, a position he held for 13 years. In 2008 he resigned the Chairmanship and was made Life President of the Club.

Phil was an excellent photographer, always willing to help new members. He ran workshops and would offer individual training whenever he could. Over the years Phil was involved with running  the Surrey Photographic Association and the Photographic Alliance of Great Britain. He was a well-respected SPA judge, helping to train new aspirants to judging as well as judging competitions and exhibitions in Surrey and beyond.

I learned a great deal about photography from Phil. He started the Venture Group idea to enable small groups within the club to help each other, and he joined the Audio Visual group with enthusiasm from its beginning.

Phil was an irreplaceable inspiration when it came to appreciating images and running the club.

There will never be another Phil Peddy.